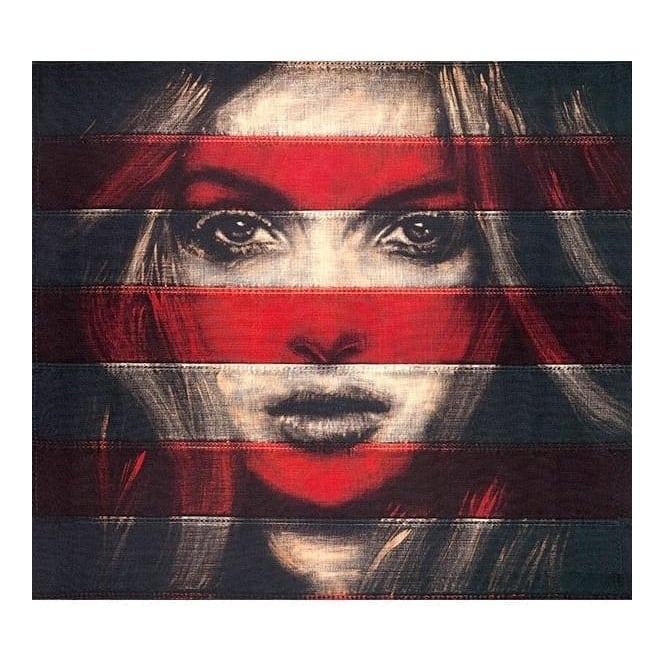 Pam Glew, born in 1978, is a Brighton based artist best known for her unique bleaching technique on fabric. Glew started making artwork on flags and textiles around 2007 as a response to war, notably 'Afghan Girl' later appeared on the front cover of Le Monde Newspaper.

Flags, quilts and brocade are used to explore and question how identity is constructed by our place of birth and the countries we inhabit. The use of textiles; washing, dyeing and sewing cloth and images of women are used to highlight the minority of women documented in art history.

By dyeing the fabric a dark shade and painting freehand with bleach, the portrait slowly develops during the painting process. The fabric is bleached many times to create contrast and the material is washed each time to remove the chemicals. The result is a timeless image, which appears to emerge from the cloth.

The artist has shown internationally in 6 major solo shows and over 100 group exhibitions, alongside such artists as Damien Hirst, Tracy Emin and Peter Blake. She has exhibited at Goss- Michael Foundation Dallas and Honolulu Museum of Art and has been shown at major art fairs in London, New York, Miami, Amsterdam and Korea. Her work has appeared in print publications including Le Monde (France), Neo2 (Spain), The Telegraph (UK) and The Independent (UK).

Pam Glew has produced commissions for Armani, Ralph Lauren, MTV and Microsoft and she has enjoyed collaborations with photographers Terry O'Neill and Bill Wyman from The Rolling Stones. Her work is housed at Saatchi & Saatchi London, Red Bull and Mitsubishi Bank and can be found in private collections worldwide.