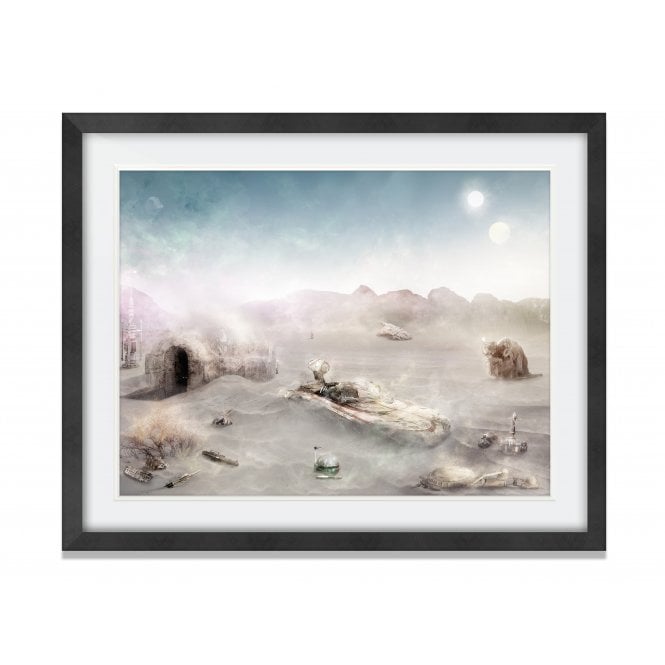 Code:
Item In Stock Item out of Stock |
Loading...

I have been asked so many times over recent years if I planned to create a full-on Star Wars piece with the most requested scene being the beautiful desert planet of Tatooine. I kept my promise!

The colour palette is soft and subtle, beautifully depicting the memories that so many have of the earlier films. I wanted to not hold back and feature key details that draw in so many fans whilst staying true to my style of working.

The subject is so well saturated within the commercial art world and I have wanted to do something a little different, to do the films justice and not to portray characters that are different to how they were envisaged and conceived.

The aim was not just to create a scene that was really strong visually but one where you could start to spot subtle yet massive details that would hint at something deeper. An unbreakable bond maybe?

A key aspiration was to create a sense of movement and time passing yet within an arid and stark environment where the winds blow the sand across like waves, exposing objects previously hidden. The question is, are the winds caused by mother nature or from something about to land?

I wanted to create a scene that was moving, where those return from battles passed. By leaving so much to the imagination I hope that yours runs away with you, to re-engage with your childhood memories from a cracking era.

So much has been left open to interpretation here, it has been great fun to be a part of and a long time coming and I hope that I have done justice to such an incredible cinematic masterpiece.

Just as an aside, the song that inspired the overriding concept of objects being revealed and picked up by a strong wind that blew in was actually ‘Vermilion Part 2’ by Slipknot! Random yes, watch the video and you’ll see where I am coming from, possibly! - Mark Davies

Born in Bedford in 1978 and raised in the East of England, Mark Davies has held a lifelong fascination with telling stories.

Inspired by the eloquence of Hans Christen Anderson and ingenuity of the Grimm Brothers, Davies studied Fine Art in Cambridgeshire before embarking on a career as one of the region’s most successful graphic designers during his formative working years.

Drawing influence from the works and lives of Piero Della Francesca, Giuseppe Arcimboldo and Salvador Dali, the thriving reverence towards Mark’s artwork nationally led to him becoming a full time artist and his signing with Wishbone Publishing in 2014. Known for a strong narrative fused with striking visual imagery – Mark’s emotive, fulfilling and enrapturing works led to his now signature ‘Storyteller’ collection in 2015.