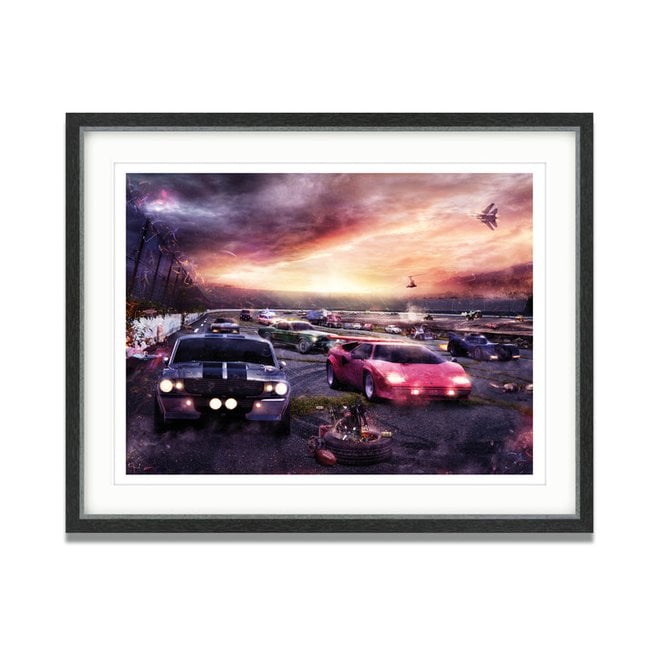 I remember when I set about creating Petrolheads back in late 2018, I wanted to create the ultimate movie car poster, an image that celebrated so many of the most iconic movie cars from years back. The end result was a sold-out piece in all formats and the most requested piece to date.

The aim was to leave a lot open to interpretation through not seeing the drivers but creating a scene that showed movement and interaction albeit out of shot. I wanted to convey a sense of belonging and affiliation through the Petrolheads club and in that instance it was a gathering in front of a drive in movie screen. Known for my art of storytelling I set off with the view that this would evolve into a series of pieces that plays out their journey. There is so much potential here through my love for movies and cars but not to the point where it mirrors the ‘Fast & Furious’ franchise – I think we are up to film number 9?

The overriding concept for Petrolheads 2 is a continuation of where we left of with Petrolheads, the cars and their drivers have watched the movie and aren’t done yet, they still have gas in the tank. So, where do they go where there are no limits? To an abandoned raceway set in the desert beneath the backdrop of the stunning Nevada mountains. Everything that made the first piece so successful has been amplified, the colours are more dramatic, the composition also, there are more cars, more magic, more detail, more things to seek out.

The desert sun is starting to come up as the cars thrash around the circuit towards you, pedal to the metal, full throttle! All the favourites are there, some slower than others but they have been joined by many, many more. They are in it for the sheer love of it regardless of the number of horses that they are pulling. Who will take the chequered flag and who could be holding it? That’s for you to decide.