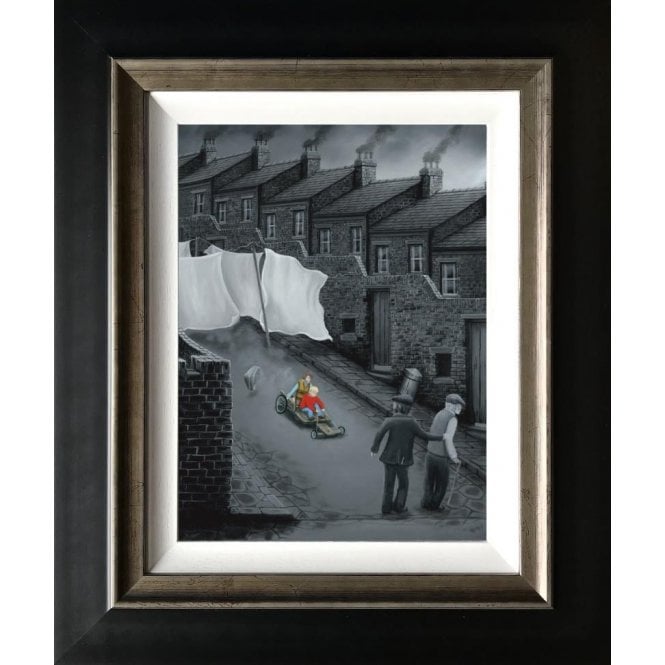 Leigh Lambert - How Do We Stop This Thing? (canvas)

Born and raised in Newcastle Upon-Tyne, Leigh began to draw as soon as he was able to hold a pencil, and family and teachers alike recognised his artistic talent in particular his attention to detail and ability tell a story with his paintings.

When the family relocated to Warwickshire in 1996 it was then Leigh focused on the development of his technique. Relocating also focused Leigh on his surroundings and his once industrial home was now replaced with the countryside surrounding him in Warwickshire, and it was then he fully appreciated his home of Newcastle and used this as the inspiration for his art.

Today living back in his home town Leigh paints from his garden studio, capturing everyday scenes, each with their own injection of nostalgia and humour.

From as young as five Leigh had an incredible eye for detail, and enjoyed drawing everything he saw especially if a tractor or combine harvester came by!

Upon leaving school aged 18, Leigh was desperate to immerse himself in the world of art and paint for a living and found it hard to understand that he needed a proper job! When his mother Susan found a job for Leigh in a local factory, this only spurred him on further to pursue his dream of becoming a professional artist.

Whilst work in the factory took up his day, painting occupied his evenings and Leigh released a series of watercolour paintings based on street scenes of Warwick. It was this attention to detail you can see in the image below that became part of his now signature style.

During this period Leigh moved on from factory life to a job within an art supply shop in Warwick, which allowed Leigh to discover a whole new world of art materials and different mediums which he was keen to explore.

Leigh's family have always been a driving force in his successful art career, and you will see glimpses of Leigh's family featured within your favourite pieces, look out for a Stevie woz ere or the blonde haired child in a red jumper which represents Leigh's father Steven.

Susie or Susan also features as a girl with a pink jumper, along with Leigh's grandparents who you will notice in Harry's Plaice chip shop or H.Lamberts sweet shop.