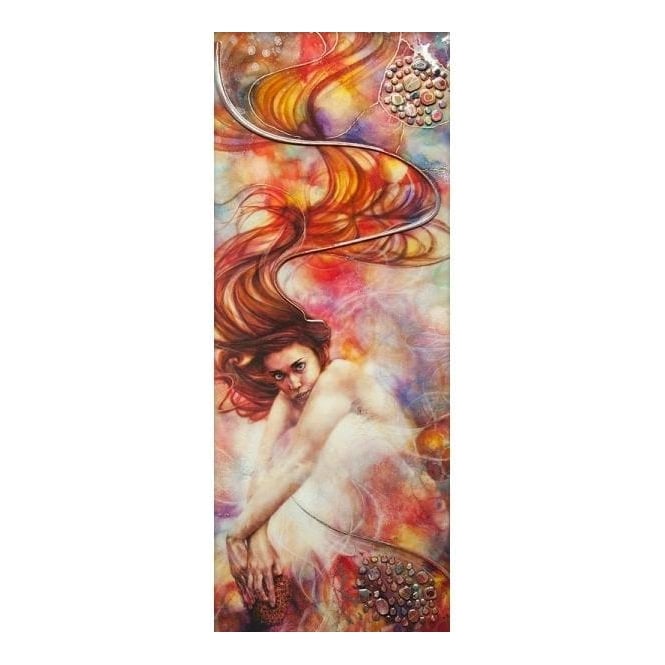 'In Classical Greek mythology, Pandora was the first human woman created by the deities on the instructions of Zeus.
Each of the deities helped create her by giving her unique gifts.
Pandora was given a large jar and instructed by Zeus to keep it closed. However she had also been given the gift of curiosity, and so ultimately opened it.
When she removed the lid, all of the evils, ills and diseases, that mankind had not known previously, escaped from the jar, but it is said, that at the very bottom of her jar, there lay hope.'

Born in a coastal town of North Wales, Kerry’s passion for art was inspired by a love of beautiful old picture books (Rackham, Dulac and Beardsley were favourites and later on, Pre-Raphaelite painting and Art Nouveau). This developed into a degree in illustration in 1996, originally intended to lead to a career in book illustration.
Following University she worked in S.America before returning to the U.K. to work as a designer and illustrator for an exclusive company, specializing in sculptured clay murals for private residences in the Middle East, United Arab Emirates and the U.S.A.
Kerry now works independently from her studio at home in North Wales, using all of these influences and her flexibility to create pieces of art in a variety of subjects.

Her work continues to evolve, and she is currently working with figurative paintings, using her unique style alongside realistic figure painting and portraits.
She also works with designers to create absolutely unique, luxurious pieces of art for an exclusive clientele.